“Do not let your fire go out, spark by irreplaceable spark in the hopeless swamps of the not-quite, the not-yet, and the not-at-all. Do not let the hero in your soul perish in lonely frustration for the life you deserved and have never been able to reach. The world you desire can be won. It exists.. it is real.. it is possible.. it’s yours.”
― Ayn Rand

I would appreciate reviews for my book Ghosts of His Past. For a short time the Kindle Edition is available free of cost. I hope you will enjoy reading this book. Just click on the link below to purchase for free.

The tape continues to play over and over again. It is as if is stuck on replay, the all familiar scene of families grieving the loss of loved ones. The questions that resonate in my mind is are we putting guns in the wrong hands. Are the people we put in positions of authority mentally, physically and morally capable of making the right judgement and decisions as they carry out the job of protecting lives.  There is something morally wrong in unnecessarily taking the lives of the very people you take an oath to protect. Life is the most precious gift we all have. Don’t take that gift from someone unnecessarily.  Rest In Peace Samuel Dubose.

You fought a long fight but you lost the battle,
We wanted you to stay a while longer
But God had another plan.
Perhaps it was because He saw what none of us could see.
Maybe more sorrow and pain was in store for you from which He wanted you to be free.
We might never know the answer but one thing we know for sure in the sweet arms of the Savior pain you will know no more.
Walk good Bobbi Kristina and may God’s perpetual light shine upon you. Rest In Peace.

I was never a big fan of Donald Trump. One of the main reason being that he somehow always manages to say the wrong things at the wrong time. When I first hear of his announcement to run for president I was one of those who laughed. The idea of taking him serious seemed ludicrous. However one thing about Donald Trump is that you either love him or hate him but you can’t ignore him.

He is one of the few people who have enough guts to call out the media and bring into focus the fact that we cannot trust the media. He went up a notch in my book for that. The media manipulate the news and media houses like Fox News even manufacture their own news filled with half-truths and lies. Another issue I admired him for speaking up about is the arrest of Sandra Bland.

Trump is now leading in the Republican polls but I doubt very much they will select him to run for President. Trump beats his own drum and dance to his own tune. He is not someone they will be able to control. He is no ones puppet and they know it. I am watching closely to see how this is going to play out. It is going to be a very interesting Presidential Election. 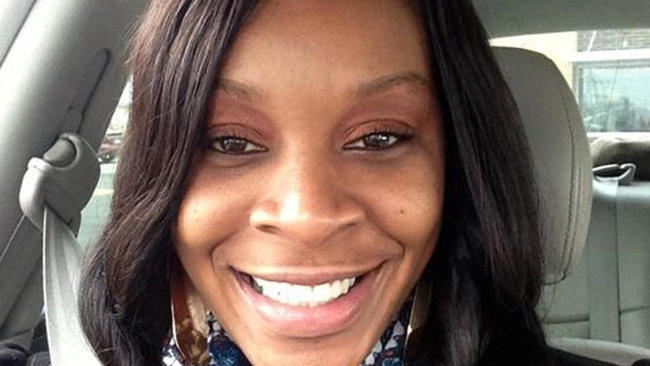 We made never know what happened to Sandra Bland or how she died but what we all know is that something went horribly wrong. A routine traffic stop should never have escalated to the level that it did and failing to signal should never have resulted in the death of this woman. The truth is she should never have been in that jail cell in the first place. The problem in this world is that not everyone is able to handle power. Put power in the hands of some and they abuse it and play God. Respect for life should be equal to all mankind. Citizens need to respect the lives of the police and in like manner the police respect the lives of citizens.

My prayers to the family of Sandra Bland who will forever ask the question why. Why was she arrested in the first place and how did she die? They may never find the answers but they can take comfort in the fact that someone higher up knows what happened to this young woman. People who do wrong often look back, front and sideways but they seldom look up. God is watching us all and they family can taking comfort knowing that her death will not go unpunished if she was murdered because God is a just God. There is one interesting question which no one has so far answered. Where did Sandra Bland get the plastic trash bag from to hang herself?

Selfishness, Hatred and Greed are like diseases spreading across the world. Man kill one another on a daily basis as if life is meaningless and they have the right to decide who dies and who lives. How can one take the most precious gift given to another and think that it’s okay?  There is nothing heroic about being a murderer. In fact many are cowards who find power only when they have a gun in their hand and even then they remain cowards because they kill and then hide.

Selfishness and greed have allowed some to become insensitive to the plight of others. The extent of how greed have taken over have manifested itself in that Detroit Doctor Farid Fata who was accused of intentionally misdiagnosing over 500 people and subjecting them to cancer treatment although they did not have the disease. According to court records, he submitted approximately $225 million in claims to Medicare over six years. He pleaded guilty to 13 counts of Medicare fraud.

The sad truth is that he is not the only one guilty of this practice. Cancer treatment has become a multi-million dollar industry, which might be part of the reason that we have not yet found a cure. The powers that be are more interested in coming up with expensive treatments that will continue to keep their bank accounts fat.  They are not interested in finding a cure and anyone holding their breath waiting to hear the announcement of a cure would sooner die from lack of air. If they find one believe me we will never hear about it. In fact there are many biologic drugs currently on the market which are known to increase the risk of cancer and yet we wonder why cancer cases continue to rise.

Any chance to find a cure for cancer will only come about when doctors go back to being doctors and less like businessmen and woman and patients are viewed as people and less like commodities. But lets face it who is going to be brave enough to stand up to these big drug companies and institutions who are making billions from cancer treatment? Let’s just say I am not holding my breath…

The most beautiful people we have known are those who have known defeat, known suffering, known struggle, known loss, and have found their way out of the depths. These persons have an appreciation, a sensitivity, and an understanding of life that fills them with compassion, gentleness, and a deep loving concern. Beautiful people do not just happen.

Never be afraid to follow your dreams. Be optimistic even if others might not share you vision. Be confident enough to know that you do not need anyone’s approval to achieve success. Not many like to take chances or go out on a limb. Do not be surprised if others might try to discourage you.

Be mindful that you may come up against obstacles and that in your first attempt you may fail. Remember that the man who succeeds is tho one who holds steadfast to his dreams and never quit.

You’ve got this life and while you’ve got it, you’d better kiss like you only have one moment, try to hold someone’s hand like you will never get another chance to, look into people’s eyes like they’re the last you’ll ever see, watch someone sleeping like there’s no time left, jump if you feel like jumping, run if you feel like running, play music in your head when there is none, and eat cake like it’s the only one left in the world!